‘India: Through the Eyes of Women' 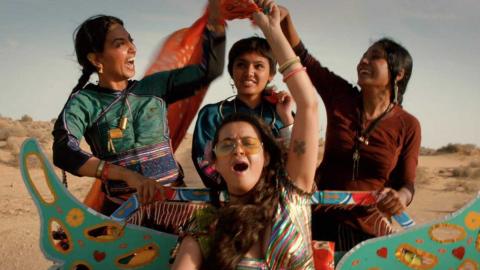 The series ‘India: Through the Eyes of Women' brings  together six of the country's most renowned women filmmakers.

India is much more than the birthplace of the potent Bollywood industry. The 11th Granada Film Festival Cines del Sur will devote a section, in the Corral del Carbón, to filmmakers who have taken the bold step of using the gender perspective to look at subjects that continue to be taboo in this country. India: Through the Eyes of Women, curated by Bina Paul Venugopal, the programmer of the Kerala Film Festival and one of the most prestigious women in Indian film, explores the themes of sexuality, freedom, family and artistic creation, through the voice of six of the most important female Indian directors of recent years.

This is the case of filmmaker Leena Yadav, who with her Parched (2015) managed to speak of conventionalisms without using conventional language. And along the way she showed the rest of the world that the sexuality issues of India can easily be extrapolated to any other country. Presented at the Toronto festival, this independent drama, written and produced by Yadav, tells the story of four women who rebel against the traditions that enslave them in a village in Gujarat state, in contemporary India. Yadav will also be a member of the Official Section jury.

Known for the documentary Made in India, where she took on the subject of surrogate motherhood in her country, Vaishali Sinha, with Ask The Sexpert (2017), introduces us to Mahinder Watsa, a 94-year-old gynaecologist who is known as the 'the sex guru' after spending almost his entire lifetime educating people about sex with humour and common sense, through a daily column appearing in a Mumbai newspaper.

With Manhole (2016), the journalist Vidhu Vincent won Best Director at the Kerala State Films, becoming the first woman to receive it in its 47 years of history. The main character in this feature film is Shalini, a student who lives with her family in Kerala. Her father belongs to a low caste and makes a living as a manual scavenger, while her mother is a housemaid. The young woman, who is striving to build herself a better life than that of her parents, hides her situation to avoid being ostracised by her classmates. When something happens that reveals her family's origin, Shalini must fight to fulfil her dream: to live a decent life and denounce the caste system that oppresses so many families like hers.

A Death in the Gunj (2016) is Konkona Sen Sharma's debut as director, but it is not the first time we see something of her at Cines del Sur. She has been acting since the age of 4 and last year's Official Section included the film Lipstick Under my Burkha, one of her most recent projects in front of the camera. Daughter of prize-winning actress/ director Aparna Sen and granddaughter of Chidananda Dasgupta, film historian/critic and one of the cofounders of the Calcutta Film Society, along with Satyajit Ray, in this edition she will screen her first feature film: a film set in 1979 that tells the story of different generations of a family getting together for a week-long holiday.

The self-taught writer, producer and director Rima Das tells, in her film Village RockStars (2017), the story of Dhunu, a 10-year-old girl who lives in a remote village of Assam, India, in a situation of extreme deprivation. She is a free spirit, while her mother, a widow, toils every day to put food on the table and raise her children. However, this doesn't put a stop to her dreams, like having a guitar so that she can play in a small band that some of the local kids want to form, the Village RockStars. After screening at the Toronto International Film Festival, Rima Das (founder of the production company Flying River Films, created to support the region's emerging filmmakers), competed in the New Directors section of the film festival of San Sebastián.

With The Cinema Travellers (2016), Shirley Abraham and Amit Madheshiya received special mention at the Festival of Cannes, where it had its absolute premiere. This documentary, filmed over a period of five years, is a journey in which the main characters, like the pioneers of cinema, amaze audiences at 24 frames per second. Mohammed and Bapu take their travelling cinema all over the state of Maharashtra, in the western part of India, showing copies of 35mm films on outdoor screens or as part of village celebrations. While staving off the disappearance of their livelihood and protecting their fragile and rusted projectors, they fill the lives of their audiences with dreams, in areas far from conventional cinemas.

INDIA: THROUGH THE EYES OF WOMEN (IN THE CORRAL DEL CARBÓN)